ICE has recently released the G-1600-SM/W proprietary hull design for a 1.6Mbbl Floating Production Storage and Offloading (FPSO) vessel. The new design is based on ICE’s track record of more than 40 FPSO/FSO projects (new construction, conversions and various studies).

It is a further development of ICE’s earlier FPSO hull design that won the approval in principle from DNV-GL and was selected by Brazilian clients.

• Simple hull-shape, with double sides, single bottom and a rounded bow to minimize slamming. Favourable motion characteristics.
• Economical to build using conventional shipyard technology, including to be assembled from hull blocks built in more than one yard, to shorten construction time.
• The basic version is designed for a variety of topside configurations weighing up to 30,000 tons capable of up to 180,000 barrels of oil per day production rate.
• Storage capacity of 1.6 million barrels of oil available for offloading, with an offloading capacity of one million bopd.
• Design extendable to accommodate topside configurations up to 40,000 tons and a storage capacity of 2.4 million barrels of oil.
• Spread mooring system with risers on the side; a turret moored version is optional.
• Mature Basic Design, ready for Class approval and Detail Design to incorporate project-specific equipment and solutions.

ICE will license the G-1600-SM/W design “as is” and will, as required, assist with adaptation to special metocean conditions, topside configuration, Class and flag requirements and customer preferences. 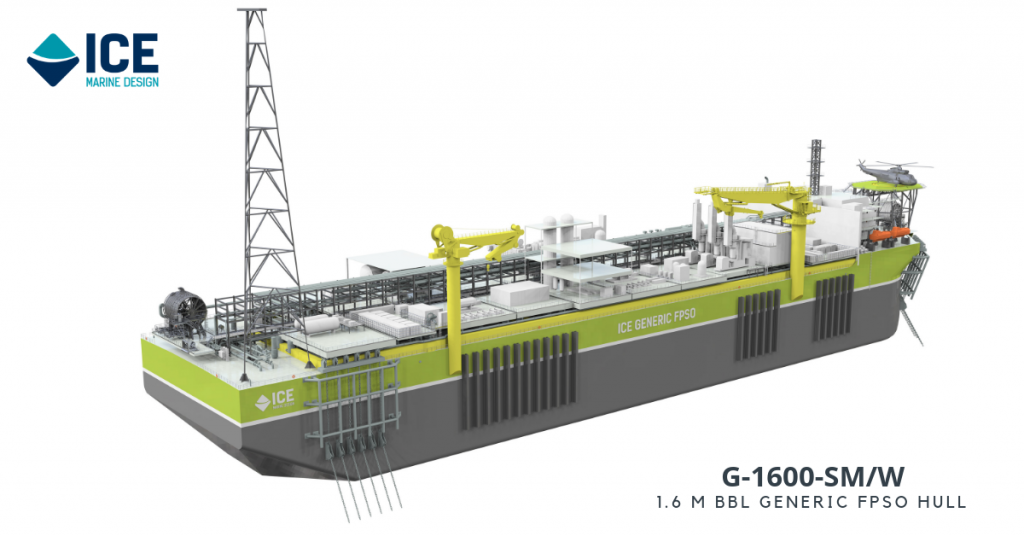